For most marketers, Facebook has become the best advertising platform for effective audience targeting. Even though it is true that the features offered by Facebook can be a game-changer. But, take a moment and think!

Today, the cost of advertising on Facebook has increased exponentially but in turn, its impressions have only gone down.

What Does This Mean for a Brand?

This simply means that by relying too much on one sales channel you make your chances for success very dicey in the longer run. It is not long before you will get caught with your pants down.

You should stop using Facebook entirely but just take a moment to look around. You will see that there are lots of channels for paid advertising that might deliver better results.

Plus, you don’t want to miss out on the advantages of other apps right!

It has become very obvious today, that people don’t just use Facebook. Studies say that the average internet user has an average of 7.6 social media accounts!

As for businesses, a survey by Lawless Research and Factual says that marketers are spending an average of 43% of their ad budget on Google and Facebook.

Most businesses are using quite similar online advertising strategies. In fact, 46% of marketers with an ad budget of $50 million or higher say that they usually spend up to 60% of it on ad programs from the two tech giants.

Below, is the comparison of how different companies spend their ad budgets money on different platforms/ Advertising Apps owned by Google, Facebook, and Amazon: 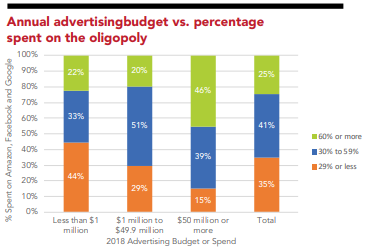 Although Facebook, Google, and Amazon have been extensively adopted in the industries, marketers are still worried that the platforms will grow powerful and soon start dictating their advertising options. When asked to rate their level of concern, 78% said they were somewhere between concerned and very concerned.

As we continue to see growth in digital advertising, do we still have Facebook alternatives apps?

Well, the answer is Yes!

Today, many marketers are looking for new advertising options although most of them spend huge money on Facebook, Google, and Amazon. As much as 65% of them want alternatives.

But, at the end of the day, everything comes back to you, whether you want to diversify your advertising, reach more customers outside of Facebook, or switch to another online advertising channel.

But, how do you choose the right alternative Advertising Apps to Facebook ads?

Before making any drastic decision, you need to consider all the pros and cons of every platform, revisit your goals, evaluate your current campaigns, and understand that signing up for more than one platform will not give you access to different audiences.

In this blog post, we’ll walk you through some of the most prominent alternatives for Advertising Apps that you should know.

Similar to Facebook, LinkedIn’s advertising and content promotion offers you all the option to create native ads, promote visual, or text-based posts in its newsfeeds.

You can also designate ad objectives, such as lead generation, web traffic, and make your ads more targeted to specific demographics. 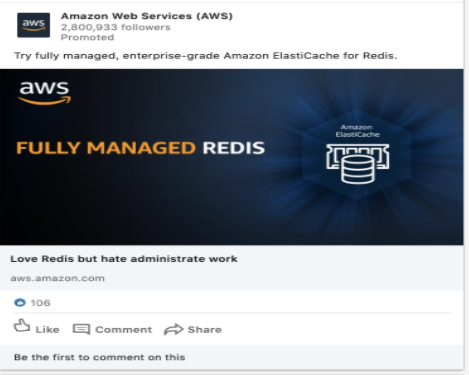 Similar to Facebook ads, paid content on LinkedIn also boost traffic and leads generations. This is especially useful in the B2B world. 80% of B2B leads are generated through LinkedIn and 94% of marketers use the platform.

Even though LinkedIn Ads are similar to Facebook, it has a slightly different nature from Facebook because it embraces professional networking and career growth. Hence, the platform becomes especially great for brands looking to sell products or services to professionals and other businesses.

Twitter Ads are very similar to Facebook Ads where you can pay to promote tweets or launch ad-styled campaigns.

A report from Twitter and Research Now says that about 93% of its users that follow small and medium-sized businesses (SMB) plan to purchase from them. The is especially useful for those that are targeting Millennials. The chart below shows Twitter users by age: 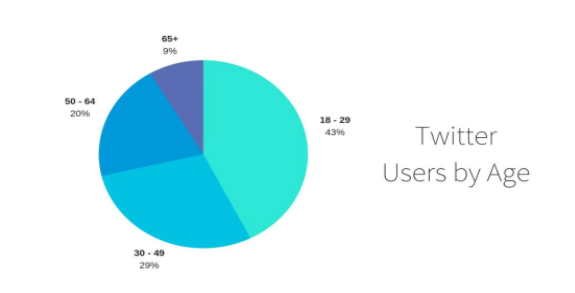 Promoted tweets usually show up higher in the feeds of target users with a “Promoted” sign. You also have the option to choose objectives for Twitter Ads similar to Facebook.

In comparison to Facebook ads, Twitter Ads are more affordable and effective as their engagement with paid ads has increased by 50% year over the year. However, their cost per engagement has decreased by 14% in 2018.

Reddit is a social network that is based on communities that encourage users to contribute to discussions called subreddits.

The platform is very unique and gains more than 330 million monthly active users. Most of its users are within the millennial and Gen-Z age groups.

Brands can test out multiple strategies, similar to what some have done in the past. They can either contribute to discussions and start their subreddits or take advantage of their paid promotions.

In the case of paid promotion, you can also consider sponsoring posts and ensuring that they are placed higher on subreddits or feeds of targeted users.

Native ads might also come in handy in case you are someone less familiar with how to engage people on the platform. Still, if you want to sell a product that Reddit users might be interested in, such as a technological gadget or video games. You can always consider a native ad that shows up in Reddit feeds or on Reddit’s sidebar.

One important thing about Reddit is that it is considered one of the trickiest platforms for marketers. Though you can promote your content, users are primarily seen responding to content that adds to conversations, rather than branded language.

However, Reddit has been seen to be making more efforts to become brand-friendly.

If you are not that interested in Reddit, it is still good to know a little bit about it and do a bit of research to learn about its audience, what topics they care for, and what they’ll respond to.

If you are a business selling products such as home decor, lifestyle experiences, or travel bookings then you should use Pinterest.

Pinterest might not be one the most prominent social media platform, but it still has a user base of over 300 million monthly active users.

The platform is known to be photo-friendly and encourages people to pin images and products they like. By pinning such images, they can create an inspiration board. This might be the reason why big brands, such as Target, have embraced the platform.

Pinterest has been leveraged by both small and big businesses. They have also leveraged the platform’s advertising tools to launch ROI-generating ads.

We all know that Google still monopolizes the search engine market, however, you might not want to write Microsoft engine options off as an option.

Formerly known as Bing Ads, Microsoft Advertising is quite similar to Google ads where you can create, optimize, and track PPC ads. These ads show up in searches on Microsoft Search Network platforms, including MSN, Bing, and Yahoo.

And if you are someone who thinks that everyone is exclusively using Google. You might need to think again. According to Microsoft 5.5 billion, monthly searches occur on its search network.

You should also know that Microsoft Ads is less competitive as it is not as heavily used as Google. WordStream says that Microsoft Advertising clients see cost-per-clicks that are 35.5% lower than Google ads.

Similar to Google Ads, you’ll might want to familiarize yourself with PPC strategies as this will help you properly monitor the budget. You’ll also need to brush up on keyword research to make your ad pop up higher than the sponsored search results.

For marketers, there is a world of digital advertising opportunities beyond Facebook. In this blog post, we have shared social sites or Advertising Apps besides Facebook for ads and brand presence. These channels are fantastic Facebook Advertising Apps alternatives to diversify your advantages. check out our other facebook related tech savvy blogs.

8 Cool and Affordable Tech Gadgets To Look Out in 2021

Everything You Need to Know : CRM Software