Cloud computing has been around for years and has proven to be a boon for businesses large and small; however, it wasn’t until recently that edge computing became so important. It refers to a type of data processing that occurs at the edge of a network, which is closer to where data originates. This will help in improving efficiency and reduce latency as well as the cost of data transfer between devices and the cloud. Edge computing can also refer to the use of smartphones, drones, and other mobile devices for various tasks.

The main advantage of edge computing is that it reduces data transfer time between devices and the cloud by processing, storing, and analyzing at the edge itself instead of sending all data to the cloud for processing.

In this blog post, we explore what edge computing is, why it’s important, how it works and where you can use it in your organization today

Why is Edge Computing Important?

Edge computing is a fundamentally different approach to managing data in the cloud than we’ve been doing for years. Rather than pushing data to remote servers, businesses can tap into the cloud to store and process data themselves, then push data to the cloud whenever it’s ready. This means less overhead, less complicated infrastructure, and lower costs than the centralized cloud approach.

The popularity of edge computing has been growing in recent years, but it’s still in its early days. Edge computing is only just starting to become more mainstream. The promise of a much more flexible and cost-effective approach is why so many businesses are interested in exploring it.

Edge computing is not cloud computing 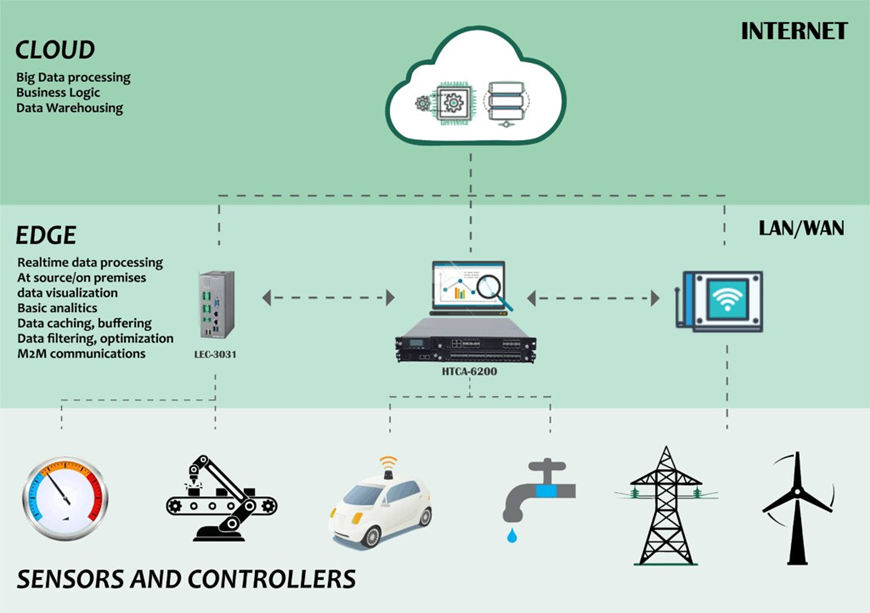 Edge computing is typically used when you need storage or processing power like cloud services but cannot afford (or are not required) to pay someone else’s bill (e.g., Amazon Web Services). With edge computing, you have full control of your hardware and software. For example, if you have some data you want to be stored in a secure location and need computational power to process it, then you might buy servers and install them at your office or home with an edge switch (this is called local edge).

If you don’t have enough space on-site for all your data — and even if you do — edge switches allow businesses to take full control of what resources they allocate for each task as opposed to being limited by available server space provided by third-party providers like Amazon Web Services.

Before edge computing, data traveling between the devices in your ecosystem had to go through a centralized server. In the cloud approach, data is stored in a server somewhere and then sent over a network to your devices.

At the most basic level, edge computing is a new way of using the cloud to store that data locally and then push it back to the cloud when it’s ready. The edge device acts as a bridge between the devices in your ecosystem and the cloud. It uses cloud services to store and process data and then pushes it back to the devices that sent it. It’s a distributed system that relies on many different kinds of computing resources, including sensors, video cameras, phones, databases and other devices.

Why you should implement edge Computing in your organization

One of the advantages of using edge computing is that it increases security. When you use an edge device to process your data, you don’t have to worry about storing all your important information in one location. If your system were compromised, hackers wouldn’t be able to access records from a central server farm because they would need physical access as well.

Another advantage of edge computing is that it helps business owners save money on bandwidth costs. This is because traditional cloud-based servers require an internet connection and a lot more bandwidth than an edge device does. Edge devices are simply connected via Wi-Fi or other local means, and they don’t rely on expensive internet connections like traditional computers do.

The move towards edge computing solves two pressing problems we face in today’s technology-driven world: physical distance and performance limitations. Edge computing decreases the need for remote servers by allowing users to access applications without having to go beyond their own networks. Some companies use edge computing simply as an efficient way of processing information while others see it as an opportunity to reduce costs by eliminating the need for employees who do not have access to cloud-based tools at their desks or offices.

If you think about your typical workflow, you probably send a lot of emails on your own personal device. With edge computing, you may no longer need certain apps like Microsoft Outlook installed on your laptop because all of your communication can now take place via email from any device — all you have to do is check your email from your phone and save attachments directly from there instead of uploading them first into Dropbox or Google Drive.

How to Implement Edge Computing in Your Organization

As you can see, edge computing is about turning part of your existing hardware into an extension of the internet. You need sensors and other devices that can connect to the internet. And you need a device that can store sensor data and send it to the cloud when you want it. The device that stores data and sends it to the cloud can be a computer, server or even a smartphone. And the device that receives data from the cloud can be a sensor, a video camera or even a virtual assistant. You can use device-to-device communication, such as Bluetooth or Wi-Fi, to connect the devices. You can also use a cable to connect sensors and other devices to a computer.

Edge computing is a relatively new concept, and it can be difficult to implement. It requires your business to move from its current infrastructure to new networking hardware, which could put pressure on your company’s IT department.

In addition, edge computing is limited by the internet speed at each location. So, if you have several locations in different countries that need to access cloud applications or other services from the same cloud provider, you’ll only be able to do so if the provider has a presence in all regions where you operate.

Edge is only limited to the specific location where it is installed. It would be difficult to scale it to every area of your business if you have a large organization or if your operations are spread across multiple physical locations.

In comparison, Cloud computing offers scalability and flexibility. Cloud providers offer more than just remote apps; they also offer a wide variety of other services such as data storage and backup, online document sharing and collaboration tools, video conferencing, CRM software modules, and many more. This gives businesses not only the technology they need but also the resources they want. It’s easy for them to build their own bespoke solutions that work best for their business and their customers.

This is not to say, however, that you should not implement cloud computing. Like any new innovation, edge computing suits some use cases more than others.

Let’s look at some of those use cases below.

The most common use case for edge computing is to store sensor data. Sensors are an important part of the modern Internet of Things ecosystem, and they generate a lot of data that might be useful for companies and other organizations. But sensors are usually connected to the internet by a wireless network. Sending sensor data to the cloud takes a few minutes. Storing sensor data in the cloud takes several days, even though it might only be used for a few hours. And then sending data back to the sensors can take several hours again. That’s not practical for businesses that need to react to sensor data as soon as possible.

The Future of Edge Computing

Edge computing is still in its early stages. Today, only 10% of companies use Edge computing. That number will rise to 50% in 2025. (Source). The popularity of edge computing will increase as more people and organizations realize how it can make their lives easier in various ways.

Edge computing will also become more prevalent as IoT devices continue to flood the market. Eventually, most data will be generated at the edge. That’s why we expect edge computing to become an important part of the internet of things over the next few years and beyond.

Shridhar Itolikar is a technology content writer. He is based in India and has been working as a content writer since 2018. Shridhar has been writing content in the tech domain since May 2019 and can’t get enough of it. He discovered his love for writing, he went on to improve this skill set (and hasn’t stopped since).

Shridhar Itolikar is a technology content writer. He is based in India and has been working as a content writer since 2018. Shridhar has been writing content in the tech domain since May 2019 and can’t get enough of it. He discovered his love for writing, he went on to improve this skill set (and hasn’t stopped since).

How To Take Advantage of Chatbots For Personalized Brand Communication?

Artificial Intelligence and Machine Learning: What do we know so far?

The Growing Power of Data Visualization in Finance

How Businesses Can Utilize Big Data For Social Media Marketing?