A-Z Tech BuzzWords in 2021 that You Should Know

To everyone’s relief, 2020 is over and we are all entering 2021 with new goals and dreams. However, the impact of the COVID-19 pandemic will be still be felt and the “new normal” will continue. So, we need to be prepared for the big changes we will see in the new year in our professional lives.

What is the biggest change you have seen in the past few years?

While it might be different for most people, but for me, it’s the pace of digitalization.

For instance, according to a blog post by Forbes, during the pandemic, the total internet usages have surged between 50% and 70%. According to research by GlobalWebIndex says that people all over the world are spending more time on their digital devices due to coronavirus lockdowns. Here is how: 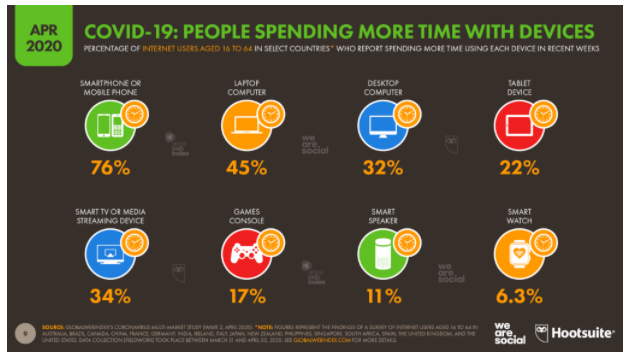 Here, are how most people are spending time online on their digital devices during the crisis, according to Mckinsey: 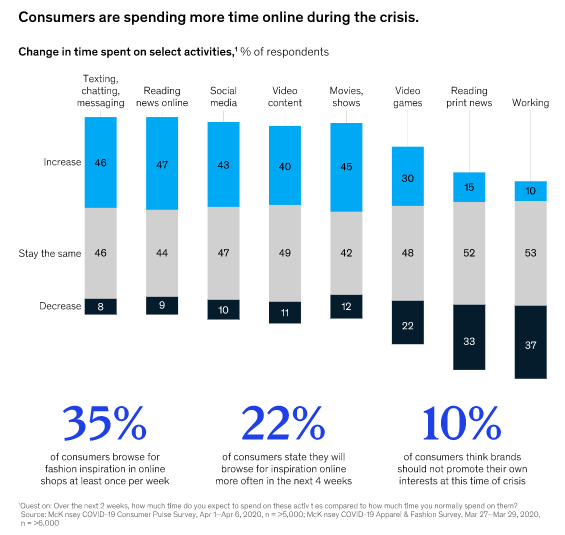 With digitalization and more people online than everything, are going to change. And, remember some tech buzzwords are valuable and have merit, while others are simply not.

So, in this blog, we will be covering top tech buzzwords that you need to know to excel in this digital world.

Developers are opting for AI in their programs to ingrain more features and make them more robust. AI algorithms are an interpretable unique description of a sequence of actions to resolve the mathematical problem.

As companies are not opting for AI-powered functioning, so you’ll probably hear this word a lot.

Advertainment is a combination of two worlds advertising and entertainment. Today, as a result of the pandemic, digital audiences want to be entertained while the big brands want them to be engaged.

As a result, advertainment has become a blurring the line between product, promotion, and media entertainment.

One of its most memorable examples includes the green Hyundai that played a role in The Walking Dead and somehow managed to stay clean despite a zombie apocalypse. 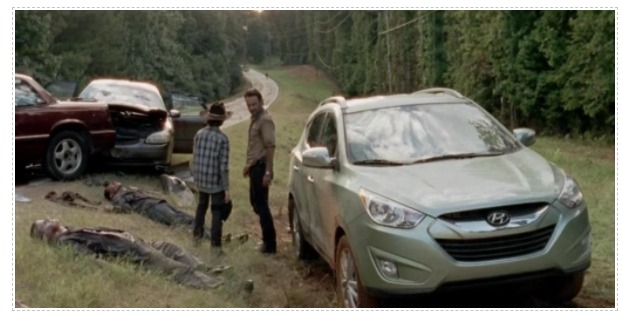 We are in the digital age and the pandemic has only accelerated its adoption and use. Everyday internet users and companies are generating leaps and bounds of data.

This data is generated in both structured and unstructured form and this massive collection of data is called big data.

Companies are finding more and more ways to collect, store, and manage this data to generate insights on customer behaviors.

You must have heard this catchphrase plenty of times in the past couple of years. However, we don’t expect it to go away any time soon.

Today, both consumers and companies are online, and to succeed in a digital marketing landscape having a content strategy is essential. Digital marketers and influences need quality content for maximum engagement if they want to succeed.

Hence, this is a term you must have heard a hundred times in the past and you will hear a thousand times in the future. Content is king! 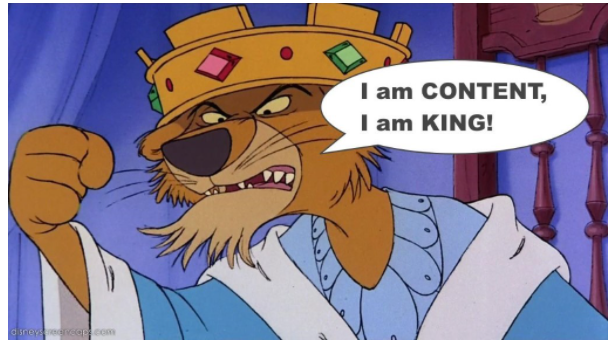 Clickbait refers to headlines that are crafted with the sole purpose of driving clicks. There is an ever-growing competition among companies to attract users to their sites. Hence, clickbait titles that can capture audience interest by driving mystery are becoming super popular.

However, sometimes these headlines nothing more than cheap chum. The term is almost used in conjunction with Upworthy or Buzzfeed.

For example, “A Man Called This Woman Fat for Ordering Large Fries – Find Out What Happens Next.” 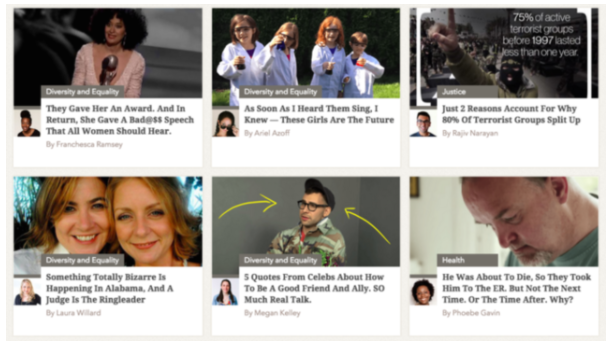 Disruptors are mixing things up and breaking the rules. You might visualize them as someone who is riding a motorcycle with aviator sunglasses.

Disruptors have become a game-changer as they are releasing new products and services through unique innovation.

For example, Uber is disrupting the hailing taxi market by changing the landscape of taxi and car pickup.

Work from home has increased the usage of the term “Efficiency”. Today, everyone including companies is trying to be as efficient as possible.

7 Futuristic Tech Gadgets in 2022 that will Make You Speechless!

Efficiency means making the most of your time and effort while simultaneously staying productive.

Freemium has slowly become a popular concept among the masses. It is a pricing strategy where the basic version of a product or service is offered free of cost.

If users want to access extra or premium features and functionality they need to upgrade to paid versions.

Some great examples of freemium are Spotify, HootSuite, Buffer, WordPress, and MailChimp. Freemium mobile games are also available in the market which is free to download but are laced with purchasing prompts.

Gamification is a process to encourage users to complete desired actions by integrating gaming elements into a product, a service, or software.

A great example of gamification is Foursquare, a widely popular app, that successfully incorporated gamification. It allowed users to earn badges every time they checked in to various locations.

You will find many apps where there is a progress bar that moves from 40% to 60% to 90% and eventually to 100% as you complete certain actions. This may include adding a profile photo, birthday, linking the Twitter account, etc.

While users don’t need to fill these data fields, however companies encourage completion by adding simple gamification elements as they long data.

Format pioneered by Sony, Hi-Res audio is a new high-resolution audio that promises high fidelity. Companies are rapidly adopting this technology to make sure what users are able to listen to the original recording of audio.

Ideation is the process where a person creates new and revolutionary ideas.

While it is not exactly a new word but is being increasingly used lately. Innovators are people who introduce new and revolutionary ideas, products, or strategies.

We all know about newsjacking, but here is a brand-new concept called memejacking. Memejacking is a jacking movement that commands content for your personal marketing purposes.

In newsjacking, writers cover a breaking news story while in memejacking writers incorporate a takeover of a meme.

Digitalization pushed us towards efficiency and we have created different ways to measure that. One of the most common ways is KPIs or key performance indicators, there is a way of measuring the effectiveness and efficiency of an organization.

It is basically used to see and understand the progress of an organization towards its goals. KPI is one tech buzzword that will be used in the future as the internet become vaster.

15. Lidar or Light Detection and Ranging:

LIDAR is optical distance and speed measurement related to radar. This is another buzz word in the tech industry as it involves the emission of laser beams.

Its sensors detect the reflected light and the distance is calculated with the help of the travel time of the light.

Millennials are probably the most popular world around the world. Millennials are the people born between the 1980s-2000s. Most of the discussion revolves around how to work with them and figuring out why they are unhappy.

Massive Open Online Courses have become increasingly popular especially during lockdowns. In the past, the term was associated with universities offering online courses. However, with digitalization, many trusted brands are considering the option of offering MOOC courses both paid and free for their customers.

We living alongside our smartphones nearly 24/7. In the past, mobile optimization was a good idea, but now it’s a necessity. Hence, businesses website of all size needs to be optimized their products and services for mobile.

Neural networks are a computer program that is inspired by organic neurons work. They are also capable of learning new tasks.

In a world of increasing digital interaction, Netiquette which is the etiquette of the internet has become a widely popular term. For instance, basic stuff such as don’t spam people, don’t be a troll, share only on-topic stories, and others.

A very technical term that is now slowly becoming a buzz word. Off-grid systems are those that work independently or as the name itself suggests off the grid.

However, these systems are having batteries that can store solar power. They are increasingly becoming popular as people are rapidly shifting towards renewable energy and the government is also providing considerable subsidiaries.

Password fatigue is the feeling which is caused when a person is required to remember an excessive number of passwords. For instance, they need to remember a password to login to a computer, undo a bicycle lock, internet banking, and even for login into their Instagram account.

Quantum Computing was a nascent technology a few years ago, but now it has grown leaps and bounds. Unlike traditional computers, quantum computers work with qubits meaning more powerful computers.

You will be hearing a lot of buzz around this industry as there are a lot of new advances in quantum theory.

Quantum Computing is considered the future of computing and we will see a lot of new innovations based on this technology in the future.

24. Radar or Radio detection and ranging:

Radar is detection and ranging technique that is based on the electromagnetic waves in the radio.

Sensor fusion is the convergence and processing of all data required for autonomous processes. Its results are better than those obtained from the interpretation of data.

Singularity is also called technological singularity because there is a point in time where machines are so advanced that they can upgrade themselves.

Second-screen is the phenomenon where users can’t just watch TV and they have to be on their mobile devices too.

You must have heard this term before as it has been very popular lately. To become “thought leaders” is the goal of many aspiring people within their industry.

Upcycle is a concept of reusing an object or materials to create a new product of better quality than the original. This tech buzzword is growing increasingly popular as more and more people are trying to reuse and recycle e-waste.

Viral is a concept where a piece of content is quickly and widely spread or popularized by media, especially social media. Social media influencers dream of seeing their video going viral.

While this used to be a fun buzzword, however, too many blogs shared secrets to going viral and now the word sounds synonymous with snake oil.

Wantrepreneur is someone who dreams about starting a business but never really does.

X-post is short for cross-post and refers to posting in more than one location. For example, users cross-post Facebook messages on other social media platforms such as Instagram or Twitter.

YouTube 360 is a new video format YouTube that allows users to film and upload shot videos in a 360-degree view. The ultimate goal of this feature is to eventually view the same with a VR headset.

ZigBee has become increasingly popular in recent years. It is a wireless protocol that is common in connected home products helping them operate in a mesh network.

It allows these devices to talk to each other in a standardized fashion. With more interconnected devices this has become widely popular.

In this blog post, we have tried to cover the most popular tech BuzzWords. This is an A-Z Guide to Tech Buzzwords!

If we missed any of your favorite (or least favorite) tech buzzwords do let us know!

Shreeya Chourasia is an experienced B2B marketing/tech content writer, who is diligently committed for growing your online presence. Her writing doesn’t merely direct the audience to take action, rather it explains how to take action for promising outcomes.
Tags: BlogTech BuzzWords
Show More

Importance of IT Infrastructure Management For Business In 2020

What is Metaverse and Everything You Should Know

Robotaxi Services: A Ride from Past to Future

Why Cloud Computing is Important for Your Business