Should I Buy the New Samsung Galaxy S21 Ultra?

Samsung‘s all-new Galaxy S21 Ultra is set to launch a month earlier than anticipated. Most of the company’s fans are eager to own the very best of Samsung’s smartphone pack in 2021.

With the smartphone’s first look, they have already wowed us with a huge screen, five cameras, and soc much more. Be beware, even though it’s cheaper than last year’s ‘Ultra’ phone, it is still pricey for the average consumer and doesn’t come with a microSD card and charger.

So, let’s take a closer look at the Samsung Galaxy S21 Ultra:

Samsung’s new phone has everything in its new Galaxy S21 Ultra. It comes with beefier specs, more cameras, and even S Pen compatibility. 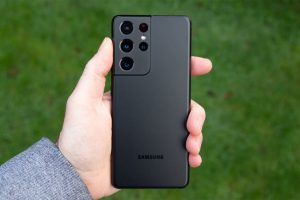 Samsung’s Vision for its 2021 Smartphone:

This year, the company has retooled its main camera with lasers to resolve autofocus issues and upgraded the specs to process large 40MP selfies, 108MP photos, and 8K video. Its photos are sharp and have a dynamic range along with Samsung’s ‘tripod lock’ software feature to prevent the viewfinder image from jumping.

One of the phone’s best feature remains its S21 Ultra’s 10x and 3x optical zoom that nailed the photos. The phone is a tale of design beauty and the performance beast.

However, photography and speed are not the only features. The phone comes with a smaller rear camera bump, a gently curved edge-to-edge display, and mesmerizing matte Phantom Black color option.

Amid an economic slowdown, the company has pushed for the overhauled look and boosted performance. They have actually made this phone significantly cheaper than letting the price increase over last year’s S20 Ultra.

But, What’s the catch?

We all know by now that the S21 Ultra is Samsung’s vision of excess, but we’ll have to let go of what doesn’t fit in the company’s vision.

The phones miss the microSD card slot for expandable storage. Additionally, you have to also say goodbye to MST and you won’t find a charger in the box either.

The final date for the Samsung Galaxy S21 Ultra release is January 29 which is a Friday. The company helps its launch event on January 14. This means that both the announcement and the release date are a month earlier.

The best deals for Samsung’s Galaxy S21 Ultra are:

The Galaxy S21 Ultra is a sleek and gorgeous smartphone. Its matte Phantom Black only helped minimize the camera bump and fingerprints smudges.

Colors of the Galaxy S21 Ultra

You will be able to find Phantom Black color and Phantom Silver color on sale everywhere. However, on Samsung’s own online store they are offering three different options: Phantom Titanium, Phantom Navy and Phantom Brown.

The need for higher resolutions than Full HD was driven among smartphones by VR headsets. Today, you can see a ‘screen door effect’ in the case of lower resolutions. But the Korean company, along with the entire mobile industry, have cooled phone-based VR initiatives.

This smartphone has Samsung’s best screen to date. When compared to iPhone 12 Pro Max, the 6.7-inch body is easier to grasp 6.8-inch body. This can be attributed to the curved display and overall narrowness of Samsung’s device.

So, to answer your first question “Should I Buy the Samsung Galaxy S21 Ultra?”

The Samsung Galaxy S21 Ultra is the best of both worlds; however, you will not see much of a difference between 1080p and Quad HD on a display. In the longer run, the Quad HD will drain your battery faster.

Twitter Partners with AP and Reuters to Combat Misinformation