Be it on plains, on the top of the mountains, or maybe in the middle of an ocean. There is always that one guy with a drone and if you want to be that guy, keep reading!

We are sure that you have browsed through hundreds of options looking for the best drone that fits your pocket before landing here. But we can assure you that you have landed in the right place and this is where your search will end.

Now, all you need to do is to go through a list that we have complied of “Best Flying Drones in 2021.” Here, you will find affordable premium flying machines with a detailed buying guide. You can pick the one that works the best for you, feature, money, and skill-wise.

Without wasting more time, let’s get to the list of the best drone in 2021: 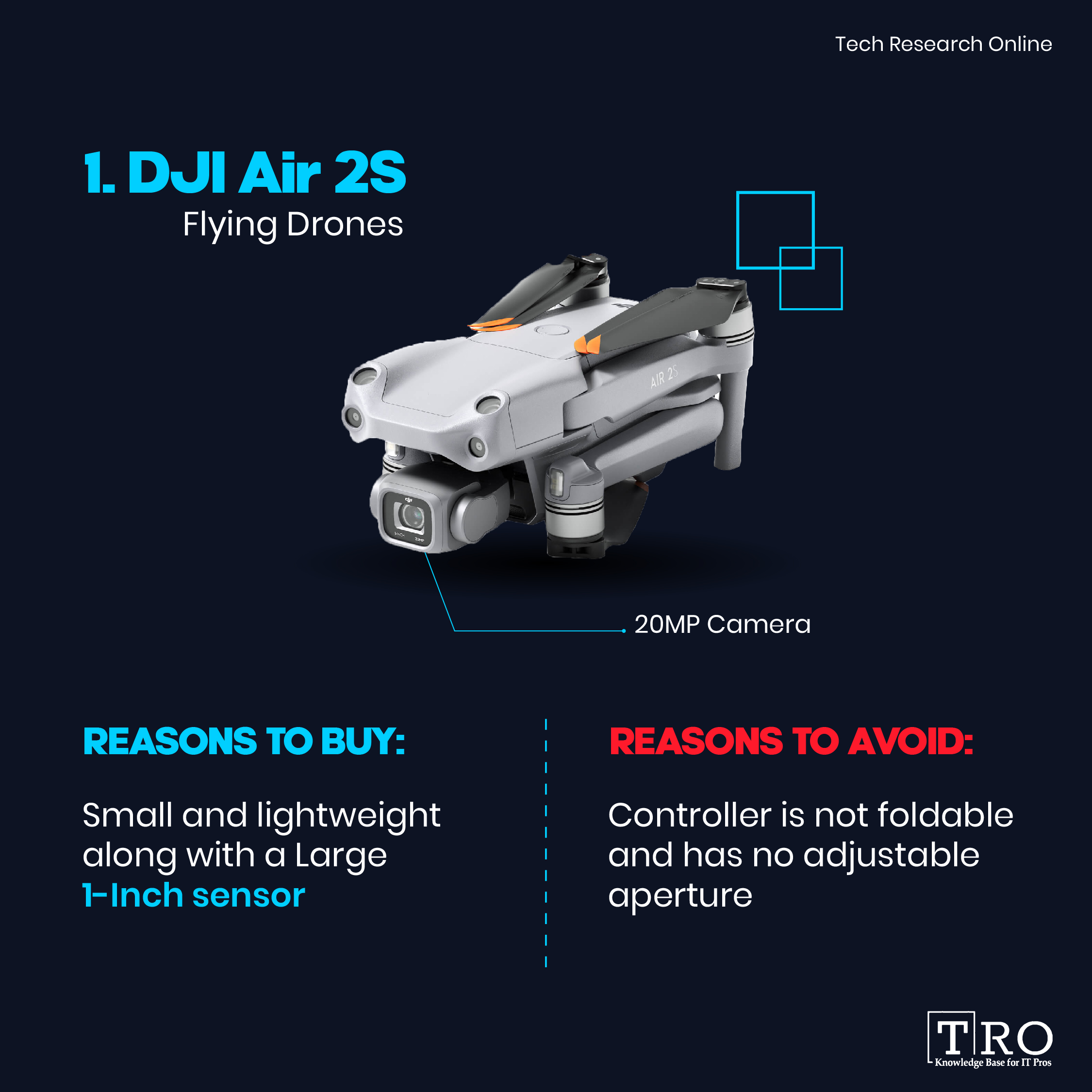 DJI Air 2S is a superb combination of the best features of the Mavic Air 2 and Mavic 2 Pro, our favorite DJI drones. The drones offer a compact design of the former and the 20MP 1-Inch sensor found in the latter. The combination makes the Air 2S our top choice for both pros and hobbyists who are looking for an easy-to-carry drone.

REASONS TO BUY: Small and lightweight along with a Large 1-Inch sensor

REASONS TO AVOID: Controller is not foldable and has no adjustable aperture

The flying drone gives you both extra creative flexibility and digital zoom supports to give you an all-around flying machine experience. 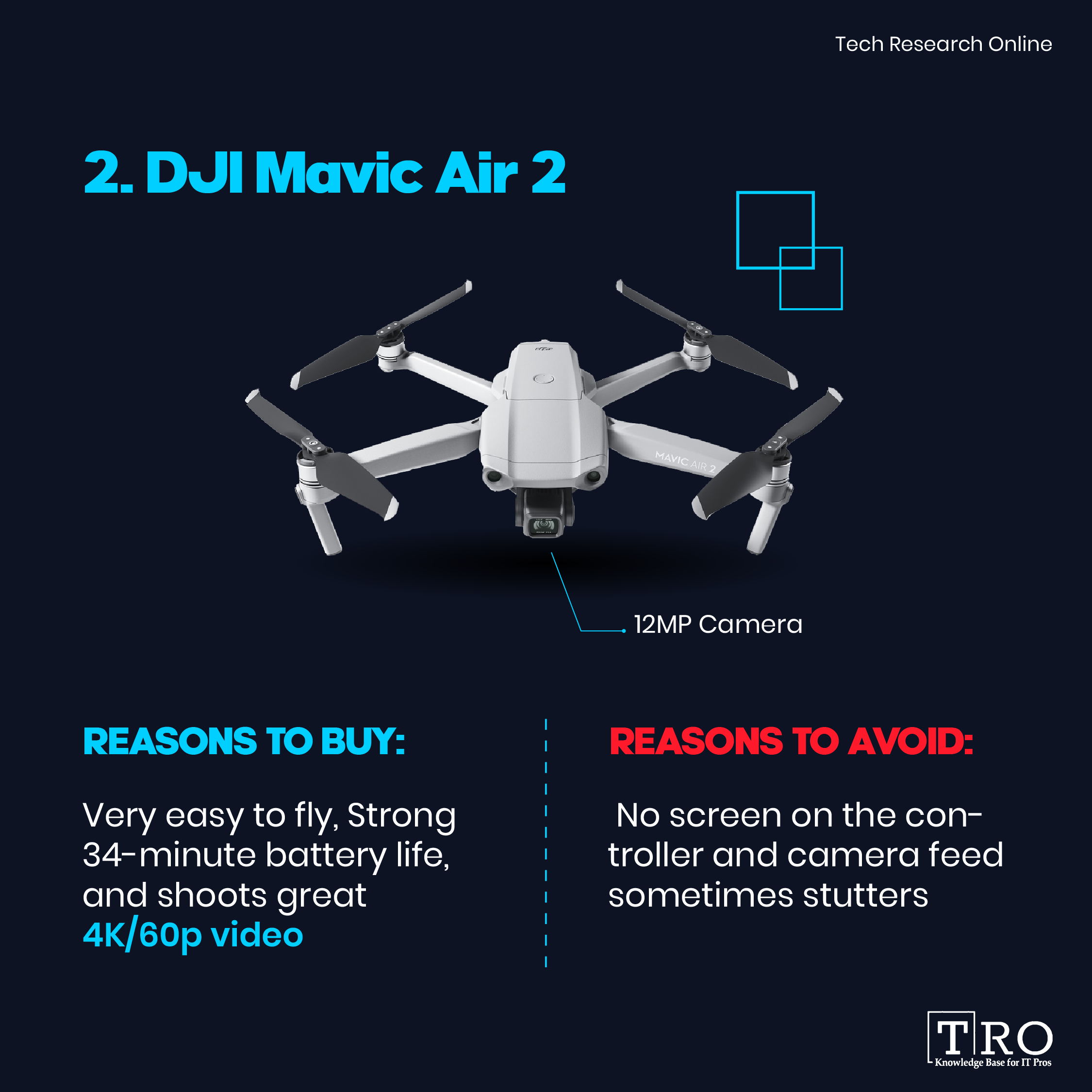 Previously, the Mavic Air 2 was our top competitor but it has been nudged out of the limelight by the DJI Air 2S. Despite this, this flying drone shouldn’t necessarily be looked at as an option, this is mostly because it’s more affordable than the latter and will suit you better if you don’t need the larger 1-Inch sensor.

REASONS TO AVOID: No screen on the controller and camera feed sometimes stutters

Besides, the flying drone still shoots 4K/60p video, has a comparable maximum 10km range, and boasts an impressive 34-minute flight time. However, we will suggest you stretch to the Air 2S if you can primarily because of its larger sensor and useful digital zoom. 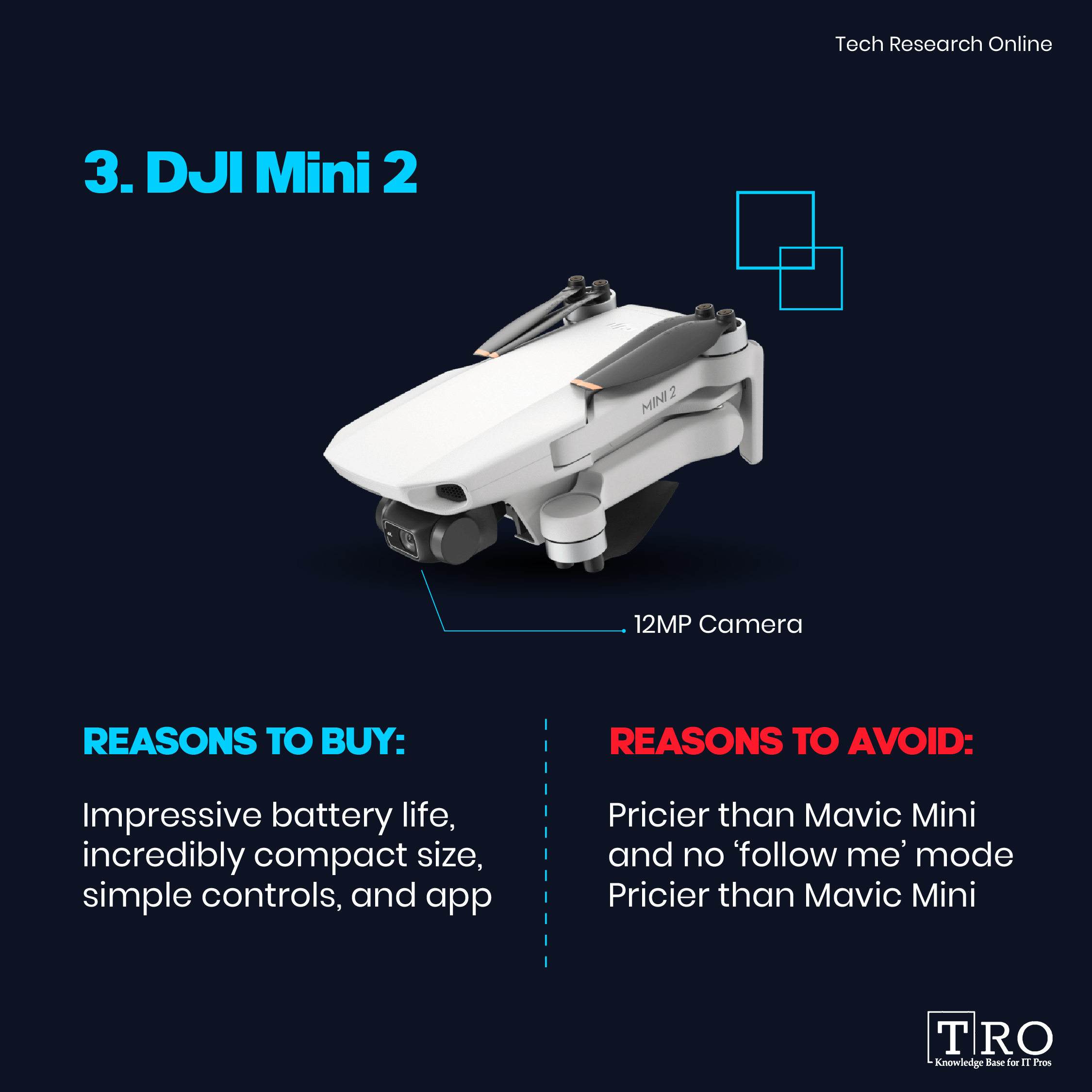 The Mini 2, which is the successor of the DJI Mavic Mini, has the same ultra-compact design as before but comes along with a new controller to delivers a more polished flying experience and boosts its range (thanks to Ocusync 2.0 connectivity).

One of our few complaints about DJI Mavic Mini was that it couldn’t shoot a 4K video, However, its successor solves that issue and gives us a few extra treats.

Similar to the Mavic Mini, this flying machine is packed with a selection QuickShot modes which are beginner-friendly and make sure that the drone performs pre-programmed moves.

But that is not it, the Mini 2 also offers more for pro snappers with its inclusion of raw photo shooting. While the Mini 2 isn’t a very big step up from the Mavic Mini, but it’s one of the best compact drones out there. 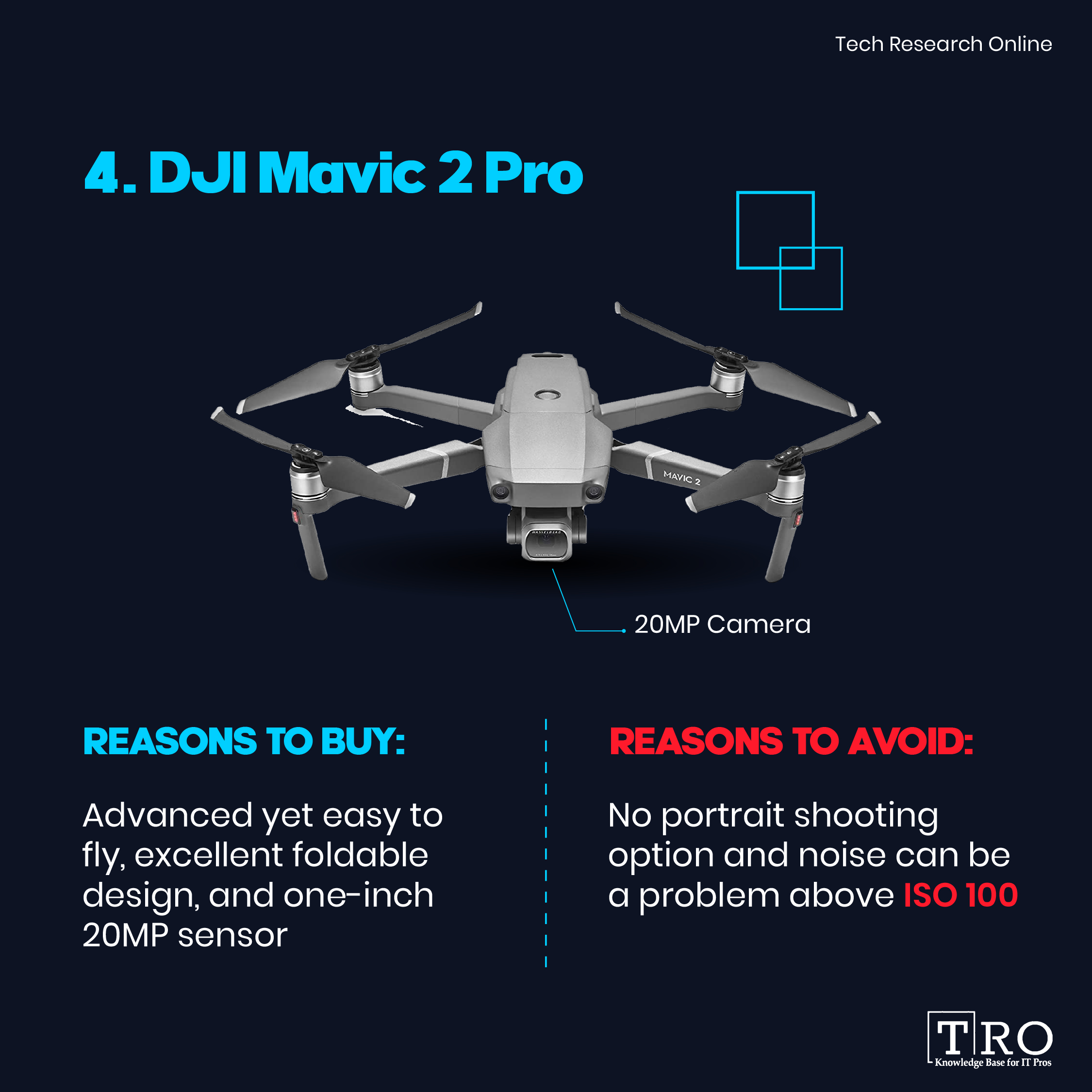 While the DJI Air 2S did overshadows the older Mavic 2 Pro, but there is no say on how much longer the Mavic 2 Pro will be around?

New rumors of the successor of the Mavic 2 Pro have already begun to surface. They say that the DJI Mavic 3 Pro (or perhaps the DJI Pro 3) will succeed later this year.

The new flagship will likely ship with a new sensor which will set a new benchmark for folding drones. However, there is no confirmed release date. At least for the time being, the Mavic 2 Pro remains a top drone in DJI’s flying line-up.

REASONS TO AVOID: No portrait shooting option and noise can be a problem above ISO 100

While the Mavic 2 Pro delivers outstanding image quality with its 20MP 1-inch sensor, this flying drone offers better value in a smaller package. The flying machine offers raw support for pro-level images along with an adjustable aperture for in-flight f-stop tweaks. This is a real bonus for all the users who prefer manual control exposure. 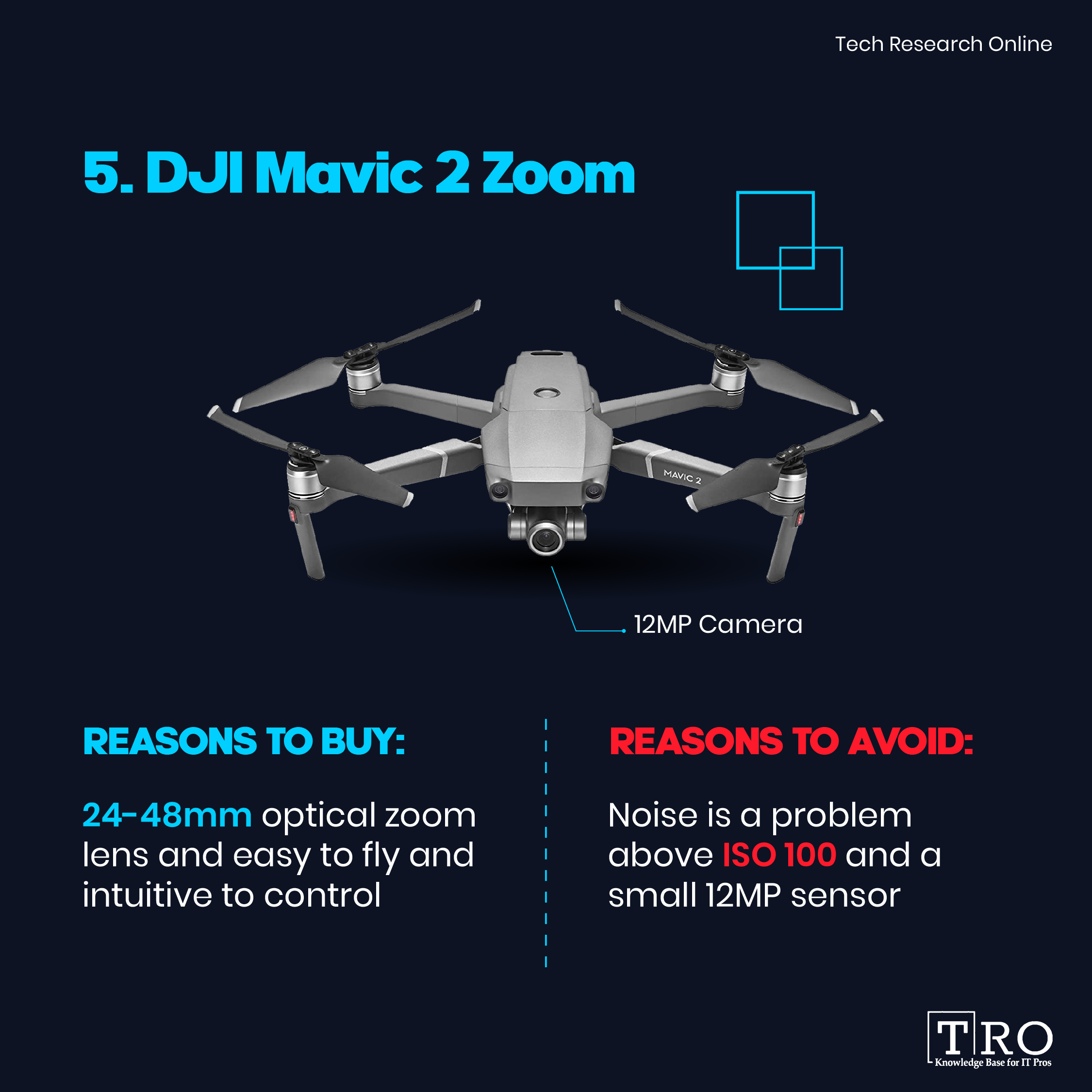 Apart from one crucial difference, the DJI Mavic 2 Zoom is quite identical to the Mavic 2 Pro, its camera system. Both the flying machines are incredibly portable and share the same lightweight foldable design.

The drone offers a range of high-spec features such as the Zoom pairs a smaller 12MP sensor with a 24-48mm optical zoom lens. This feature enables the users to capture close-up shots while maintaining a safe and legal distance.

REASONS TO BUY: 24-48mm optical zoom lens and easy to fly and intuitive to control

REASONS TO AVOID: Noise is a problem above ISO 100 and a small 12MP sensor

The boon is that the zoom lens can unlock creative shooting potential. Distortion is minimal, the range is good, and control is intuitive. On top of that, it offers all of the intelligent flight modes including Active Track and Hyperlapse.

To sum it up, if you are someone who wants a drone with zoom, this one is for you. 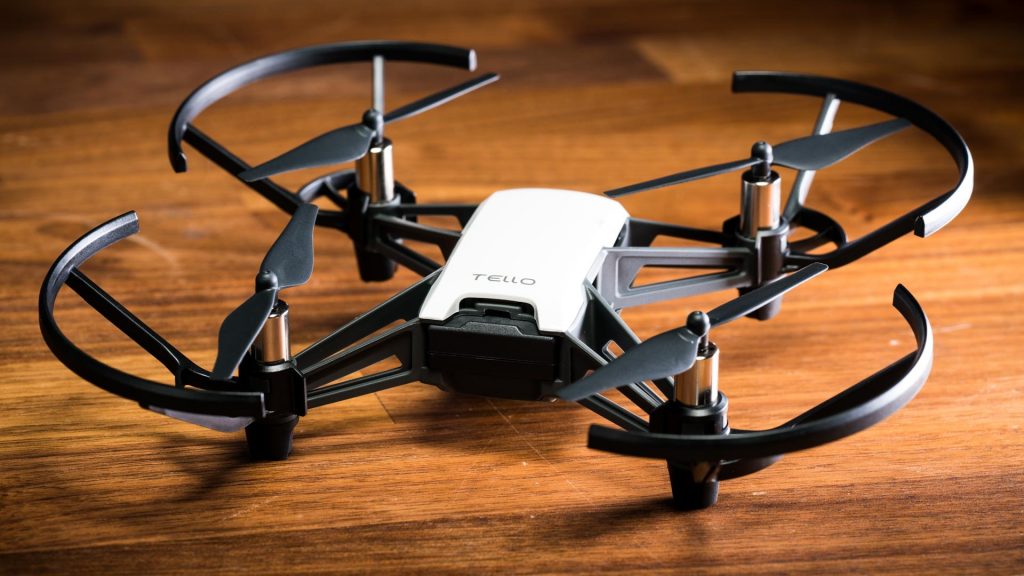 Ryze Tello can be defined as simple, lightweight, and affordable. It is designed to be a fun drone for beginners and first-time flyers. The flying drone offers plenty of features such as 13 minutes of reasonable flight time along with a handful of automated tricks despite its budget price tag.

REASONS TO BUY: Lightweight and compact and responsive flight controls

REASONS TO AVOID: Unstable in the wind and choppy video transmission

The nose-mounted camera offers less impressive image quality with limited dynamic range and compression when streaming 720p HD video. Besides, the frame rate is affected by any drop in connection strength as video is beamed directly to your smartphone.

That said, the drone’s app is straightforward with an on-screen twin-stick setup. The theoretical range given by the company is 100m, but 30-40m is more realistic.

To sum it up, Ryze Tello is a fun drone to fly on a calm day, reacting nimbly to intuitive inputs and zipping along at a rapid chop. Despite its limited range. which is a bit restrictive, it’s the best starter drone around.

PowerVision’s PowerEgg X is an aerial orb with a distinctive ability to fly in harsh conditions such as rain and land on lakes. While the quality of the image is affected due to its plastic waterproof housing, but being able to operate in tough conditions opens up an array of possibilities.

The PowerEgg X can be deployed as a handheld camera and an autonomous AI camera with its versatile modular design. It can be mounted to a tripod and controlled with hand gestures.

REASONS TO BUY: Converts into a handheld camera and can fly in rain and land on water

On the flip-side, image quality isn’t great but it does produce decent 4K footage in bright conditions. But with its fixed aperture, it can’t compete with DJI’s Mavic drone’s fixed-focus 12MP 1/2.8-inch CMOS sensor. The drone also does not offer an option to record in Raw video formats.

To sum it up, the PowerEgg X is one of the best options around for shooting, sharp video sequences in bad weather.

The Parrot Anafi is a lightweight, bug-like drone with the best photography chops that are among the most impressive. The drone can take direct photos with its 180 degrees camera of a vertical range which is a feat others can match.

REASONS TO AVOID: No obstacle avoidance

The flying drone also offers a 2.8x zoomable lens with no image quality reduction. It is a particularly good choice for selfie fans.

It offers a Follow Me mode which automatically adjusts for more photogenic angles by tracking your movements. Plus, its SmartDronies modes, such as Orbit, Boomerang, Parabola, and Tornado, allows it to fly in circles around you.

However, we will not recommend it to first-time users due to its lack of obstacle avoidance. 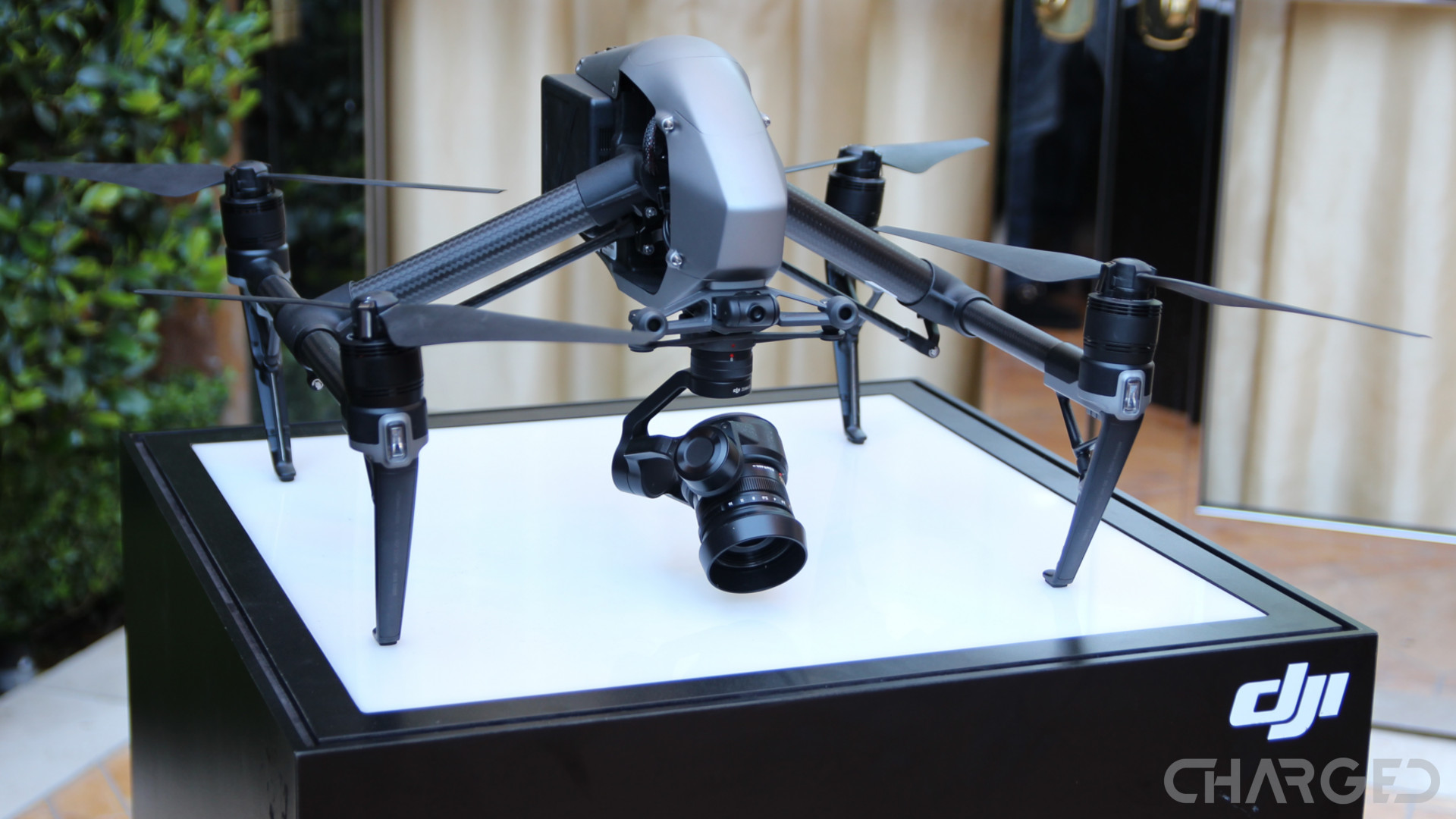 DJI Inspire 2 has soundly knocked its predecessor out of this list with a sleek metal composite bodywork upgrade. This flying beast is an impressive piece of kit. What’s more?

The drone has advanced object avoidance technology. Hence, users don’t have to worry about the body accidentally getting scratched.

REASONS TO AVOID: Quite pricey

The drone offers you more than 25 minutes of flight time with its twin-battery arrangement. It also offers you the ability to swap camera lenses which means that professional photographers and videographers will now have complete control over their creations.

The drone kit is completed with a fully-featured smartphone app and a dedicated remote control, both of which make it incredibly easy to control. But make no mistake, this is a professional piece of kit and beginners should avoid it together. 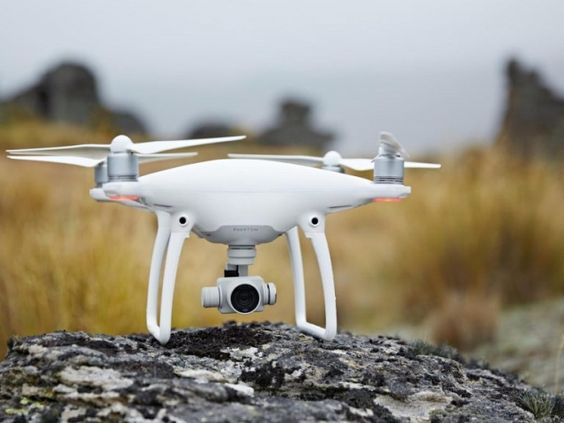 DJI’s Phantom series took its drones to new heights. While the company’s Phantom 4 Pro V.20 isn’t the latest model, it remains the finest for professionals in need of something sturdy and reliable for harsh weather conditions.

The Phantom 4 Pro V2.0 was launched in 2018 and was a big upgrade on the Phantom 4. The upgrade bought vastly improved obstacle avoidance and intelligent flight modes. Its 20MP 1-inch sensor can also shoot 4K/60p video and impressive raw stills at 100Mbps in the D-log color profile.

REASONS TO AVOID: Pricier than Mavic 2 Pro, large and bulky, and more complex than foldable

Of course, the Phantom 4 Pro V2.0’s size is as convenient as the foldable Mavic 2 Pro. But it brings a mechanical shutter and boasts a higher 4K frame rate.

It’s certainly worth considering if shoot high-quality aerial stills and video in challenging weather with some excellent handling and 30 minutes of flight time which might be too much for the Mavic 2 Pro.

Screen-Time In The United State Is Rising: Why Is It A Good Thing?