Digital Signatures and its Future

Today is your big day, if the deal goes through, you’ll get a big fat bonus and maybe a promotion. You jump out of your bed and rush to the office, eagerly waiting for the clients.

As the clients arrive, you finalize the last phase of the deal. Once everything is in order, you hand them all the legal paperwork to sign.

After the deal, your boss congratulates you and hands you your bonus cheque.

As you stare at your hard-earned bonus, you start questioning how just a piece of paper can be converted into cash just by the authenticity of the signature.

Hasn’t this question crossed our minds at least once?

We have known the concept of and use of signatures since our childhoods without even acknowledging its importance.

So, this brings us to the first question, why are signatures used?

Well, for centuries, signatures have been used to authenticate someone’s identity and consent. They are considered as someone’s agreement or consent for maybe, a sales agreement, employment contract, or one’s identity.

But, in the last decade, the world became increasingly delocalized. This meant that the contracts were not always happening in the here and now with all the parties present.

In the 20th century, fax machines an efficient method of sending documents, with legally enforceable signatures, became popular. Traditionally, documents were printed, then signed, and then scanned to the computer for storage.

This process was not only tedious and frustrating but also leads to wastage of paper and other resources. This birthed the idea of electronic documents and digital signatures.

Q1. What is Digital Signature?

To think, a digital signature is a digital equivalent of a handwritten signature, is an understatement.

Instead, a digital signature is a mathematical technique used to validate the authenticity and integrity of a digital document.

You might think that this method is fairly new but individuals and businesses started to adopt it widely in the late 2000s. 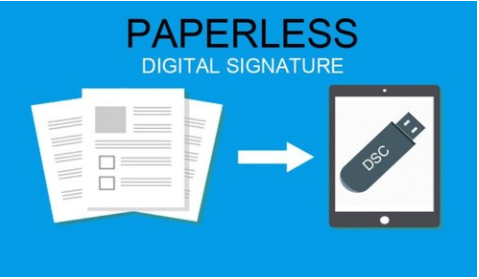 Besides, a digital signature solves the problem of tampering and impersonation by offering far more security than a handwritten signature. For instance, digital signatures can provide evidence of the origin and status of electronic documents or digital messages.

Q2. Why Would you Use a Digital Signature?

Digital signatures are efficient and increase the transparency of online interactions. They help develop the trust between business partners, customers, and online vendors.

Q3. What are the Types of Digital Signatures?

Based on the technology it uses, all the digital signatures fall into these three types:

As this signature is not encrypted, it does not show the signer’s identity or changes that occur after the document is signed.

2. Basic Digital Signature ability to show changes that occur after the document is signed. But, this type of signature still does not guarantee security.

The documents signed with both simple and basic types of digital signatures do not have the legal power and legal consequences.

3. Advanced Digital Signature is the safest and has the legal strength equivalent to a wet signature. Advanced signatures can show when, where, and what devices are used during the document signing process.

This type of signature also tells you what changes occurred after the document is signed.

Q4. What are the Three Benefits of a Digital Signature?

But, the three most crucial benefits of a digital signature are:

Digital Signature offers efficiency as documents can be signed at any time, from anywhere in the world.

The owner of the digital signature also has a digital key and is bound to a specific user. Hence, there is no need for a handwriting expert anymore.

Digital Signature links the document and the signatory. So, once the document is signed, the digital signature allows no further changes in the document.

Post-digital signature an entity cannot deny that they have signed.

Q5. What are the Advantages and Disadvantages of Digital Signature?

Like any other thing, even a digital signature has its own set of advantages and disadvantages:

Q6. Which Industries Use Digital Signatures?

Financial services have adopted digital signatures to avoid the tedious and time-consuming process of managing physical documents and signatures for banking and finances.

Healthcare services use digital signatures for new patient forms, consent and claims processing, and insurance benefits processing to make the administrative processes efficient. It also helps then improve the data security of the patient’s personal and medical data.

Real estate is another industry that has adopted digital signature wholeheartedly to make the process of paperwork smoother and comfortable. They are used for sales contracts, documents for residential and commercial use, and lease agreements.

Q7. What is the Future of Digital Signature?

For instance, research by Marketsandmarkets says that the digital signature market is projected at around USD 2.8 billion in 2020 and it is projected to grow by a CAGR of 31.0% to USD 14.1 billion by 2026.

These numbers raise an obvious question, why now?

Well, for one, the information exchanged over the internet is facing more security issues than ever before. For instance, Security Magazine says that there are over 2,200 attacks each day which breaks down to nearly 1 cyberattack every 39 seconds.

A digital signature is a great way to curb or mitigate these kinds of attacks. For instance, a malicious email is sent in a phishing attack that appears to be from someone different than the person who sent it.

Let’s understand it this way, you receive an email from the CEO. It contains a directive that guides you to click on a certain link and fill in the required details.

A few hours later you are informed about the breach in security and the bread crumbs ultimately lead the security team to your computer.

The security team tells you that the email you clicked on and the link you followed was from the hacker pretending to be the CEO.

This is where digital signatures come in.

A digital signature and an online electronic signature software will help keep the integrity of the sender and help deal with man-in-the-middle attacks.

The second factor behind the rise in the digital signature is the growth in the e-commerce sector. This is also fueling the increased usage of a digital signature as it acts as a seller, buyer, and exchanges goods and services over the internet.

E-commerce employs digital signatures to build the foundation of any successful e-commerce transaction that required authentication, verification, and security.

According to Statista, in 2020, there are around 1.9 billion active users worldwide active online banking users and the number is forecast to reach 2.5 billion by 2024.

With growth and awareness about the importance of security on the internet, customers in both e-commerce and online banking industries will demand better security before online transactions. This will, in turn, led more people to shift to the use of digital signatures to secure transactions.

How do you Mean by Digital Signature?

A digital signature is a mathematical technique used to validate the authenticity and integrity of a digital document.

Does a Digital Signature Replace a Handwritten one?

There is no one answer to this question as digital signatures are a substitute for handwritten signatures, however, in the future, there is a possibility that the former will replace the latter completely.

Is a Digital Signature Legal?

What is a Digital Signature and How it is Used?

A digital signature is a mathematical technique used to validate the integrity and authenticity of a message or a digital document.

Can the Bank Accept Digital Signatures?

Digital signatures are valid and enforceable for some banks in some developed countries as long as certain requirements are met. If parties have given their consent to the use of digital signature, they have the same legal effect as their written equivalents.

Digital signatures have been around for more than a decade now. However, their global usage has been increasing steadily over the past few years.

The rising popularity of digital signature can be owed to the three main benefits it provides over handwritten signature: Integrity, Authentication, and Non-repudiation.

Besides, the digital signature has also proved itself to be a time and cost-saving way to efficiently do the paperwork. Hence, industries that deal with a large amount of paperwork on daily basis have embraced this technology.

While digital signatures, still have some drawbacks such as security issues, software requirement and cost, expiry, and others. Its industry is still gaining large traction from several industries.

In this blog, we have given an overview of digital signature and its basic dimension. If we have missed something that you’d like to read about do let us know in the comments below.

Benefits Of Blockchain In Different Industry

Top 5 Conversational AI Trends to Look out for in 2021